Missing my Friend and Myself: An Unacknowledged Side of Grieving?

On April 10, 2012, I lost my dear friend of 50 years, Thelma Midori, to the dastardly disease of cancer.  My friend Thelma and I became best friends when we were young nursing students.  Over these fifty years, we only lived in the same city for some five years. But our friendship was deep and enduring despite the geographical distances between us.  Miles never made a difference to our connection and caring for one another. 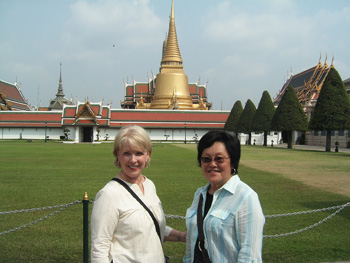 I have been trying to understand over these last few months why the missing of my friend has been so profound, deep and intense. I believe I am coming closer to an understanding and appreciation of an often-neglected aspect of grieving, the missing not just of our loved one, but missing a part of yourself.   One helpful insight has been the brilliant and astute writings of Nora Ephron.

In her book, “I Remember Nothing: And other Reflections”, Ephron was able to capture a side of loss that is less well articulated or acknowledged, that is, the missing of ourselves as well as the other when we grieve.

“….when someone loses a loved one, part of the loss is that they remember things about you that you don’t.  A story that they will tell about you, something you said, somewhere you were….but you have long forgotten but they bring it forward.   And you recapture and relive your life in a way that is only possible with that person”.

Yes, my friend Thelma observed, thought, and reflected on our friendship experiences in ways that I never had or had long forgotten.   Her retelling of stories of our 50 years of friendship always caught my attention.  She was a significant witness to my life and recounted it in ways that no other did or could.

Who was this friend who has had such a powerful influence on my life? At the time of our meeting at just 17 years old, Thelma described herself as being  “an introvert, shy, and anxious about being in a big city”, living away from the warmth and comfort of her family home for the first time.  But Thelma overcame, or perhaps better still, she challenged her shyness, her self-consciousness, and shone in our nursing class.   She excelled both academically and clinically during those three years.   She was indeed our rising star that culminated in her being our Class Valedictorian.   And she continued to shine in her nursing career that culminated in her role as Dean for a few years prior to her retirement.

I realized some years ago that it was Thelma’s words that had the greatest impact on my life, whether verbal or written.

It was many years ago, but I vividly remember Thelma’s words when we were young nursing students when she disclosed to me that her parents “would never use chopsticks outside of the family home”. And Thelma also told me, “If you and I are walking down the street and we both have a run in our nylons, they will remember mine but not yours”.

I was too dumb and immature at the time to recognize that what Thelma was trying to convey in her words was her parents’ and her own experience of residual racism that still existed towards our Japanese/Canadian citizens following World War II.

So of course it made perfect sense when Thelma disclosed her thoughts and experience of being a visible minority in her blog.  Following our trip together to Hawaii last November 2011, she wrote:

“I wish Hawaii would like to become part of Canada.  I loved being a non-visible majority.  Something, somewhere within me just relaxes  when I blend in with every other person in the crowd.  I was mistaken for a local a couple of times.  That was fun!”

Thelma also made similar comments when in 2009, she joined me in Thailand and sometimes clerks or waiters would begin talking to her in Thai.  She also found that fun!!   Following our travels in Thailand and Viet Nam, Thelma went for her second visit to Japan to visit her Uncle and cousins.   She described to me that it was like “coming home” and her deep connection with her Japanese heritage was ever present in her home and heart over the past several years.

In 2005, I published a little book entitled “Spirituality, Suffering, and Illness”. I invited Thelma to write a personal narrative of her recent illness experiences.  She did so with her usual comfort with words despite the harsh content.

“Due to an increasing malignant Cushing’s syndrome, my immune debility, and hormonal holocaust manifested in a series of illnesses over a  two year period. When I had the energy and courage to persist with the question:  “Why?  Why is this happening to me?”, my persistent  illnesses and suffering became my spiritual journey.  And then I learned that joy and sorrow are one.  My suffering was a great source of  learning, and the genesis of a new and ever-evolving view of who I am and why I am here.  I am blessed with the ongoing questioning and  answering.

She closed her narrative with these words:

“I cringe and ache at the suffering of others and sometimes despair for the world.  Before my illnesses what I might have labeled “suffering”, I  see in hindsight was only my anxiety, doubt, deep regret, disappointment, discouragement – but not the soul searing and spirit killing that I now know as suffering”.

A few years later, serious illness would again intrude in my dear friend’s life in the form of breast cancer.  But this time Thelma was well along on her spiritual journey of embracing Buddhism and drew strength from that.  She also knew when to be alone with her illness and when to seek the comfort of others.  She also began a blog, The Saga of the Boobs.  This blog became a vital part of her illness journey as she sent it out into the world.  It became a healing intervention for her and a profound medium from which many learned and were inspired!

“There must be 50 ways to suck your thumb!  Some of my favorites are:  stay in bed, have a very hot bubble bath, read 500 pages of a good book, watch TV (nothing more violent that Murder she Wrote).  Oh and another way I suck my thumb is comfort food”.

I miss so many things about my dear friend but on top of the list are her magic with words; and the wisdom she offered through her words of humor, of inspiration, of wisdom, and of love.

Yes, from the shy, introverted nursing student of some 50 years, my friend Thelma evolved into an open, straight up, self-disclosing, frank, forthcoming, and very spiritual woman.   But her foundational DNA was always her sensitivity, gentleness, kindness, warmth, and humor.

I dearly miss my friend Thelma.  I miss her more than my words can adequately express!   Her words could be both poetic and crisp; words that uplifted me, chastised me (but always with kindness), inspired me, comforted me, and made me laugh.  I was always left longing for more of her pronouncements, her catchwords, and her literary tidings!!

And I miss a part of myself with Thelma’s passing.  I now realize this “missing of self”,  has been a significant part of my mourning.  I believe it is this “missing of self” that is often unspoken or unacknowledged in our grieving for another.   It is this reliving of our own life through the witnessing and retelling by another that is lost when a friend/family member dies.  Helen Keller offers another revelation to this idea:

“With every friend I love who has been taken into the brown bosom of the earth, a part of me has been buried there; but their contribution to my being of happiness, strength, and understanding remains to sustain me in an altered world”.  (The Open Door, 1957)

Yes, my world has been altered with my friend Thelma’s death but my life has been forever enriched by her friendship.  And as Helen Keller so aptly expressed, part of me is with Thelma, and me with her.   Now I understand further that my grieving and loss is about missing both Thelma and parts of myself.  The longer a relationship, the more parts of ourselves that goes ‘missing’ when loss occurs.  Now the phenomena of “missing” within grieving is more understood by me and also more accepted.

50 Responses to “Missing my Friend and Myself: An Unacknowledged Side of Grieving?”